Over the years, and as companies have added more technology into vehicles, the automotive world has seen a rise in electrical components failures. Even superior quality vehicles such as the Audi brand are susceptible to electrical failure and require repair from time to time.

Let’s take a look at some of the issues your Audi may experience electrically, and what you can do if or when it happens.

Reasons for Electrical Failure in Audi

As mentioned, one reason typically for electrical failure is the fact that cars have advanced in technology. Manufacturers try to stay ahead of their competitors, so more advanced systems have been added to their vehicles. With more components that have not had years of testing while in operation, they can be prone to premature failure until the engineering catches up.

Liquid damage can wreak havoc with your electrical system. Liquids and electricity do not mix. With the MMI system located under the cup holders in Audi vehicles, many accidental spills have caused a trip to the shop for repair.

Vibrations and loose connections can be the source of electrical problems. Whether a loose connection appeared when the vehicle was built or caused by vibrations, constant bumps, and impacts on the road, electrical components with poor connections are disasters. Displays in all types of vehicles have been susceptible to road vibrations and damage from driving impacts. Electronic switches such as those that control the brake light system can also be affected under the same circumstances.

Electrical Issues and Your Safety

While some of these electrical failures can be a nuisance, others such as stuck brake lights and the loss of displays present a safety issue for the occupants of the vehicle. Ignition coil failure and drained batteries can leave others stranded on the road with passing traffic. Electrical problems tend to show themselves over time. If you begin to see quirky electrical issues in your Audi, have it immediately inspected by an experienced Audi technician. 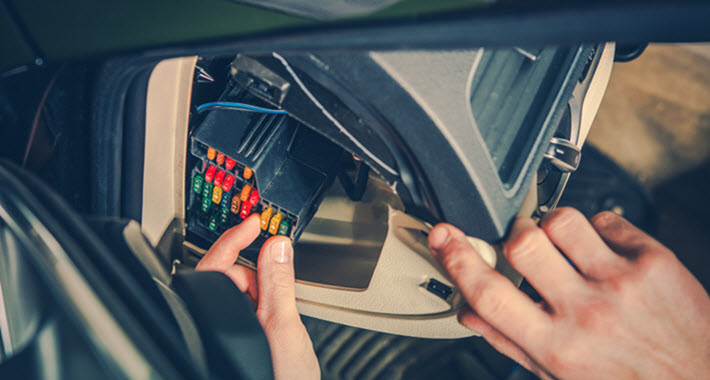 At Dell’s Service Center, we proudly serve the communities of Green Bay, Manitowoc, and Sturgeon, WI. We can solve any issues with your Audi’s electrical system.

Our dealership- alternative shop specializes in quality service without the expensive cost. Our highly-trained technicians will diagnose and get your vehicle back on the road where it belongs.

As the best repair shop in the Green Bay area, we specialize in many European models. Give us a call and bring your car in today for quality service you can trust.